Recently I purchased this product from a website called BarkingDeals.com. 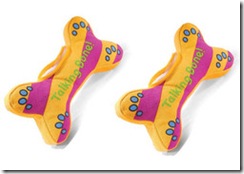 It was Two Recordable Talking Bones and the ad stated:
Hidden in the depths of this durable plush chew toy is a device that allows you to record a personal message to your pet that’s up to 10 seconds in length. All it takes to activate your voice is a nudge or gnaw from Fido.

You can re-record your message as often as you like, and better yet, there’s a lifetime “rip it up” warranty. For a minimal shipping and handling fee you can request a new canvas exterior for your Talking Bone. And since there’s no limit on the number of replacements you can receive, once the new bone has been chewed beyond repair, you can request a new one ad infinitum. Just record, chew and repeat!

I thought, wow, how could I lose?  Minnie chews up the cover, I replace it and bang! New toy!
I removed the "egg" from its cloth bag inside, recorded my messages to Trixie and Minnie, stuffed them back inside, zipped it up, snapped it up and handed them to the dogs.

I underestimated Minnie's persistence and tiny pea-brained ideas of foodstuffs.

I woke up this morning to this… 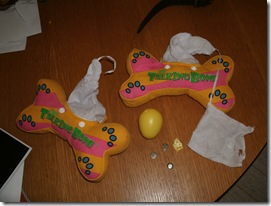 She had managed to unsnap, unzip and remove the recording device from both toys.  I found three of the four batteries and a small piece of one recording "egg".  The other egg was intact.  Maybe she was full. 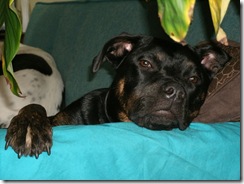 I was livid!  Yes, she's a chewer, but to be able to deftly get inside, remove the egg from its cloth pouch and eat it?  In one night?  Impossible!  But she did.

I fired off an email to the company stating I wanted my money back, it lasted one night...Minnie may have a battery inside her festering bad recordings...blah, blah, blah.  I was mad. (Update: all batteries and lost egg accounted for.)

I received an email back from some guy named Steve.  "Please send me a phone number where I can reach you".

This is when the tide turned and blew me away.

Steve called - turns out Steve is Steve Watters, the Founder and CEO of Barking Deals.  The founder!  The founder is making customer service calls!  I was impressed.  No excuses, no "buts", just "we're really, really sorry, here's your money back and let me send you some stuff."  Oh, "and pick out any deal you want and we'll make it so".

We chatted for about 10 minutes (I was at work, after all) and he told me that he was going to speak to the manufacturer as well.  Then he started firing off his ideas at me.  He's got a really great plan in place for shelter fundraisers and is about to launch it.  I think all of you who fund-raise for shelters are going to want to get in on this (Mogley, I'm looking at YOU.)

He told me about his own "destructo dog" and the menagerie of pets he has.  We talked about his last company - and his future company.


Best of all, when I told him I was going to blog about the product and how well he treated his customers, he offered up FIVE coupon codes to purchase a product for $.99 to give to you, my wonderful readers and pals.

ATTENTION ALL RETAILERS!!
THIS IS HOW YOU DO CUSTOMER SERVICE!!

One other thing:  Steve - are you hiring?  Because you're the kind of guy I'd love to work for.  You get it.

Barking Deals is a social buying website that invites pet lovers and their friends to save up to 50 to 90 percent each day on their favorite pet products. The company aims to introduce manufacturers to a niche group of receptive consumers who share the products with others in their social networks.
To sign up for tremendous pet deals, or to find out more information about Barking Deals, visit www.barkingdeals.com. "Like" Barking Deals on Facebook (http://www.facebook.com/BarkingDeals) or follow on Twitter (www.twitter.com/barkingdeals) to fetch updates about upcoming deals.

Or just click on the picture to your right.

PS: I wasn’t paid for this review.  I did it because they backed up their products with great service.

PSS: Twix is sick. Please go cheer her up and wish her and her grandma well.

PSSS: Looks like Charlie's sissy is sick too.  Please say nice things to them as well!
Labels: barkingdeals.com great customer service he gets it recordable pet toys shelter fundraising

Wings1295 said…
The customer service from the founder is awesome, but it sucks that the chew toy failed!

We have a chewer, too. Actually we have two dogs. One has a bone that he has played with and tossed around almost daily for 8 plus years and the bone is in near perfect shape. He loves it, but loves it as it is, I guess.

Our other dog is part vizsla/part hell-hound. He is 25 pounds of terror and no toy, bone, blanket - anything - is safe from his shredder fangs. I have yet to find a toy he can keep longer than a day, much less a night.

So, as I was saying, great for you on the customer service and care handling your complaint. We do need more companies like this!
Thursday, February 03, 2011 6:37:00 PM

Anonymous said…
I'm glad to hear they have good customer service. I ordered from them for the first time last week...3 Kong Wubbas. I'm still waiting on them but I'm glad to know that if I have a problem I can get it resolved!

We'd love to be entered into the $.99 coupon deal!

Cyndi and Stumpy said…
I don't want in on the give-away because snail mail is a problem in dirtville.

I just want to say how scary that your dog was able to destroy and eat such toxic stuff and yipee to a company that understand the definition of customer service; a rarity these days!
Thursday, February 03, 2011 7:42:00 PM

Kari in Alaska said…
Sorry that the toy didn't work out as expected but that sure is great customer service!

houndstooth said…
That is incredible customer service! I wonder if this Steve fellow is single... My sister is single... Could I be lucky enough to have a dog toy tycoon as a brother in law? Nah! Probably not, but wow! I am impressed!

Morgan says that if the recording had said "Minnie is the best dog in the world" the toy probably would have lasted longer! Obviously, it was irresistable!
Thursday, February 03, 2011 8:51:00 PM

Taffy said…
Barbara, thanks for the link and the information. I will most certainly be asking the vet about that tomorrow. You're a wonderful blog buddie!
Hugs to you,
Teresa and Twix
Thursday, February 03, 2011 9:11:00 PM

24 Paws of Love said…
LOL, I couldn't stop laughing at the fact that your dog opened and ate the egg. Oh, do I know that story. Glad she's Ok and that you had such great service. That never seems to happen much in the world anymore does it?
Friday, February 04, 2011 12:35:00 AM

The Thuglets said…
So disappointing the toy let you down. Hope Minnie is ok and you found the missing battery!

The store founder Steve well you should have him "bronzed"! Here in the UK we suspect they have never heard of such a thing the head of a company doing customer service! WOW

We'll pop across and see Twix.

3 doxies said…
I don't know why you is so surprised Minnie did dat. I was sittin' heres reading da story and knew what was gonna happen befores I finished...I'm smart likes dat you know.

Dolores said…
Minnie is such a stinker! How wonderful that Steve called you.....I'm so impressed when people that really follow through and care. I wish him the very best in all his endeavors/
Hugs,
Friday, February 04, 2011 7:15:00 AM

Sue said…
Wow, customer service? I didn't know that it still existed. And you got to talk to a real live person, not a recorded list of numbers to push? This sounds like a company we'd enjoy getting to know. I hope he's successful and that his success doesn't go to his head and he remembers how important real customer service is.

Levi said…
Yup, I am just like Minnie- toys don't usually last too long with me!
Mom thinks that sounds like the bestest customer service ever!!
Friday, February 04, 2011 10:19:00 AM

Vintage Christine said…
Well, good thing it was a plastic egg she at so that her farts don't stink like sulphur! As soon as I read about that item I thought, "Wow, I could record myself yelling Bad Holly Bad Boogie and freak them out big-time!" I'm cruel, yes indeedy-do.
Friday, February 04, 2011 12:52:00 PM

Mack said…
WOW! That was great and RARE customer service.
And Oh My Dog is Minnie a LOOKER!!!!!

Tweedles -- that's me said…
I am happy Minnie is okay.
Its unheard of that you got to speak to the president guy.
That kind of customer service went out years ago.
The world could learn a lot from him!
love
tweedles
Friday, February 04, 2011 10:22:00 PM

Eartha Kitsch said…
Oh gosh, the minute that I started reading that post, I thought, "Oh god...Minnie is totally going to eat it!"