Back By Some Sort of Popular Demand


What you are about to read is true.

Seriously, we mean it.

Or poochie tummies or thunder thighs.  Men prefer women to be delicate little creatures, with no heartiness to them at all.

You see, should you be able to mow the back 40, or tend the oxen while furring the rows, you will be completely and utterly unattractive to the male being.  Those kind of "women" work on farms and raise our food.  You do NOT want to be one of "those" kind of women.

And get rid of those glasses, for heaven's sake!  They don't make passes at girls that wear glasses either!

Men prefer that you stretch, bend or improve your bosom and your "leisure class bulges".  Because he wouldn't marry a woman without money either!  So make sure you have an ample dowry too.  What's that old saying - it's as easy to marry a rich girl than a poor one?  Yeah, he's looking for that.

They have this equipment at Pretty Body, and you KNOW you want to use it, because nothing says "small ass" like Toastmaster! 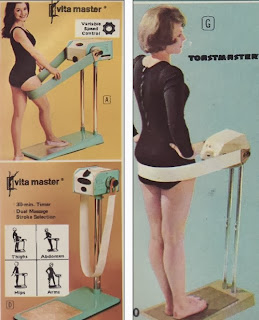 Honestly, you are there to be an ornament, nothing more.  You are a vessel for his entertainment, and that alone should be enough for you.

When you're lounging at home, make sure you have this on (but of course, not when he's anywhere around. 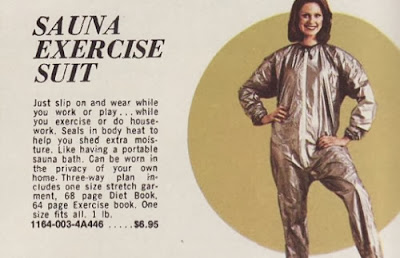 Why, you really shouldn't be doing anything other than pointing to a dress (DON'T speak, for goodness sake!) and making an affirmative motion with your face (must be pretty and slim) only, and let the hired help fetch that for you.

Being thin and beautiful is EVERYTHING.

Now, doesn't it make you feel good to know that Pretty Body is now an empty, abandoned wig store?  I'll bet it does.

I'm off for a hot fudge sundae.  Any takers?

Labels: a fun time had by all ma kettle that asshole what men want your fat ass