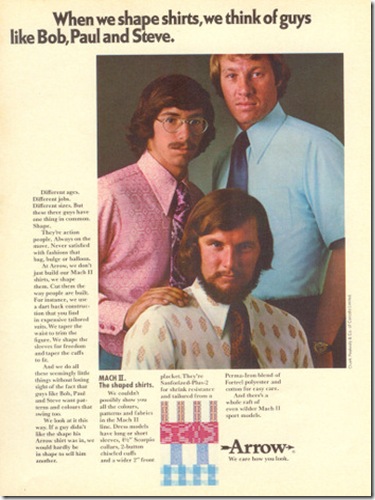 They’re in your IT department.  Bob’s mother still shops for him, hence the pink shirt and lavender tie.  And that’s an inappropriate touch at work there Bob.

Steve spends his weekends at the commune, but during the week sports patterned shirts that match his bitchin’ beard.

Paul?  Well, we’re not too sure about Paul.  No one knows where he goes at night, but his perma-press Arrow shirt won’t give him away.

Vintage Christine said…
Now that is hilarious--putting nerds in an ad on purpose to sell dress shirts. Quite a step down from the gorgeous Arrow Collar Man from the early 20th century (I just read where he received up to 17,000 fan letters a day and he wasn't even real--just a drawing!).
Saturday, January 09, 2010 7:29:00 AM

jamie@midcenturymania said…
I'm guessing Bob STILL lives with mom. Steve is living in a little cabin deep in the Santa Cruz mountains with his 8 dogs and 5 cats, a wife named Rainy and a daughter named Sunshine. Paul is chasing skirts at the insurance company he works for...and paying alimony and child support to his 3 ex-wives. That was a very funny post. What was the ad dept. at Arrow thinking?
Saturday, January 09, 2010 10:52:00 AM

Chickens in the Basement said…
You are a funny girl! I like that! And I see two of my favorite girls have already been here. I'll be adding you to my list of favorites!