Use a Lemon, Get a Marriage Proposal 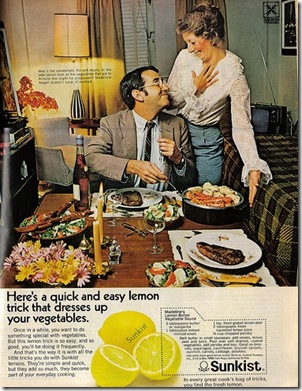 le them to you.   But they were sooooo worth it.

Just a squeeze of lemon on a steak (or even more stealth, vegetables) could cause a man to instantly propose to you. Because of this odd feature, lemons were banned in New Jersey for years.

Thanks to technology, scientists found the secret gene in lemons (the “Irrational Lemon Reaction Gene”) and were able to breed it out, so lemons were now considered safe and the bottom fell out of the contraband market.  That’s why they’re available everywhere now.  And aren’t we glad?

Sorry for the delay in posts folks, life got in the way…

Chickens in the Basement said…
I just love the title! Wonder what you would get if you could grow a lemon tree?
Saturday, February 27, 2010 6:06:00 PM

jamie@midcenturymania said…
I heard they were smoking lemons in the 60's in California! The webpage for the first fireplace is http://www.focus-creation.com/FluidBook/index.html#126. There are two different websites but this is the catalog that has the most fabulous fireplaces I have ever seen. I don't think they sell these in the U.S. I have to do more research...ha, like I could afford one anyway? Maybe I'll be lucky like Mick and someone will give me one!
Saturday, February 27, 2010 9:14:00 PM