And speaking of briefs… 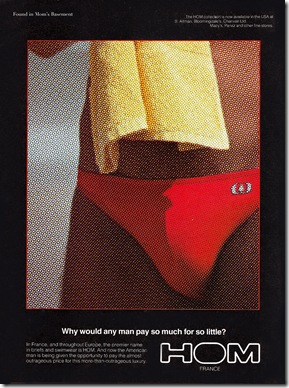 How many pairs of undies do you think THIS ad sold, and to whom?

Women who fantasized their men in them?

Men who fantasized showing off their size in them?

Maybe Grandma bought them for their grandsons.

No, that would be creepy.

Supposedly, they were extra comfy because they cost more money and the men in Europe thought nothing of shelling out thousands of pounds for them.

So, yay or nay?  Would you wear them or want your significant other to?

picture from Found in Mom’s Basement

jamie@midcenturymania said…
Uh Chicken, what is a fruitball?
No, definitely no. Boxers please! Once again Barbara you've outdone yourself with the labels.....crotch crusher?? Largess??? I'm feeling rather full from the chocolate fondue and strawberries (I just posted on my newest fondue pot...I am NOT referring to the Hom Dude)so I think I'll hit the hom, I mean hay.
Tuesday, March 16, 2010 10:58:00 PM