This whole bru-ha-ha about the move “Eat, Pray, Love” has been driving me insane. 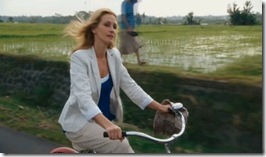 Everyone is on the bandwagon – even the Home Shopping Network is having “special EPL sale days”.  Cost Plus has a line. A massive amount of related merchandise has already been unleashed on the public: handbags, jewelry, journals, tea, fragrance, furniture and something called "firming serum" (which might be part of the "pray" portion). There’s a huge sign for the movie where I work.  This movie IS EVERYWHERE.

I started the book way back when and never finished it because it was whiney.  I just couldn’t get any feelings for this woman.  She was too self-involved.  Deal with the hand you’re dealt woman.  I don’t feel sorry for you.

So when I ran across this review today, it said everything I thought, and I’m sharing it here.

“Unctuous. That’s the only way I can describe Eat, Pray, Love. Unctuous. Characterized by affected, exaggerated, or insincere earnestness. I didn’t buy it. I didn’t read the source material, so I can’t speak to the book. But this Elizabeth Gilbert — the one in the movie — I don’t see how anyone can relate to that character. Putting aside the white privilege that Courtney ranted to eloquently about yesterday, there’s also the notion that anyone could buy into this fortune cookie bullshit. Gilbert is a shallow, self-indulgent, and arrogant woman. This person is not going on a journey of self-discovery, whatever the fuck that is. This person is abandoning her life. Instead of confronting her problems, instead of working through them, or processing whatever it is that makes her so inexplicably unhappy, she abandons them. And she abandons a husband who — at least as he’s characterized in the movie — is loving, charming, and more than adequate because she needs some more goddamn “me time.”

Don’t we all, sister? Get the fuck over it.

And for what? So she can find herself? Or so she can find a better man? It’s hard to tell from the movie, because this woman is as shallow, self-indulgent and arrogant at the end of the movie as she is in the beginning, only now (*spoilers*) she’s traded Billy Crudup for Javier Bardem. From an aesthetic point of view, maybe that’s a worthwhile swap. But the best I can gather from the film is that all she learned along her journey of self-discovery is that she can eat more pasta, speak better Italian, and meditate, which is to say: Spend more time with herself, because God knows why anyone else would want to spend time with her. She’s no better than the Julie Powell character in Julie and Julia: She finds herself by boring other people with her petty fucking problems, and shitting on anyone dumb enough to give a damn.

I don’t like these kind of people. The Oprah types, who have to tell you how great they are in order to convince you. That’s all that Eat, Pray, Love boils down to: A woman trying to convince you of how great she is so that maybe you’ll take a similar journey — literal or metaphorical — in which you try to convince everyone of how great you are. There’s a scene in Eat, Pray, Love that’s typical of this white, bourgeois bullshit, where Elizabeth sends an email to all of her American friends to guilt them into sending a poor family some money to buy a house as a birthday present to her. Noble? Perhaps, if it weren’t so motherfucking transparent that the gesture is less about helping out this family than it is about celebrating her goddamn selflessness. I know people like this — I suspect most of you know people like this. People who manage to work their good deeds into virtually every conversation, the same way that gym obsessed person will work his morning work-out routine into all of his conversations. Like we’re the goddamn beneficiaries of their good health.

The people who will go to this movie, who read the book, they’re probably trying to find some answers. I get that. A lot of us are looking for answers. Some of us look at the bottom of whiskey bottle; some of us look to a higher power; and apparently, some of us look to selfish, well-educated narcissists, who don’t provide you with any answers as much as they try to convince you that they have the answers. They don’t.

But let me tell you where you’re not going to find those answers: In a Hollywood movie directed by the asshole who created “Glee.” Sure, he can splice together a sexual-identity crisis with a soaring rendition of a Streisand showtune better than anyone, but he wouldn’t know sincerity if it were fucking him in the leg. He’s not a feature director; what he did to Running with Scissors was absolutely criminal, and if there was at some point something genuine in Gilbert’s memoir, it doesn’t exist here on the screen.

Putting aside the movie’s themes, how does it hold up as entertainment? It stinks. It’s a travelogue hosted by a solipsist. It’s like being forced to look at someone else’s vacation photos for two-and-a-half insufferable hours while they narrate their empty little epiphanies. “This is the pizza place where I discovered that life is not about pleasing other people; it’s about pleasing myself.” Fuck you, and your Buddhist Ayn Rand bullshit philosophy.

Eat, Pray, Love is about a woman with marital problems — we don’t ever really understand why — who decides to skip town for a year. She visits Italy, where she eats. She goes to India, where she meditates. And then she goes to Bali, where she finds a man. That’s it. Eat. Pray. Love. It’s right there in the title, so at least it’s not misleading.

There are exactly two genuine moments in the entire excruciating experience, and they involve Richard Jenkins — who plays a Texan visiting an Ashram in India — and Bardem, a divorced and heartbroken man who deeply loves his son. In fact, the only honest relationship in the entire movie is between Bardem’s character and his son. Ryan Murphy must have taken that day off to focus on the Lady Gaga episode of “Glee.” Roberts, of course, is Roberts: She alternates between pouting and breaking into that signature laugh like a epileptic Julia Roberts’ doll. Pull its string, and it will cackle like a burst balloon.

The next time Elizabeth Gilbert takes a trip in order to facilitate a memoir, I know the perfect destination. She can jump up my ass.”

Thank you Dustin.  My thoughts exactly.

1950s Atomic Ranch House said…
Must be like the whole deal when that book came out, called The Rules, you know, where women told other women how to play at getting a man?

Sure, it had a token nugget of common sense, like "don't compromise your life for a man" duh.... But anything tainted with Oprah just gets, well, tainted.

"He's Just Not That Into You" was a better book if you ask me. I'm sure women hated it. ;)

Callie Brady said…
Thank goodness I don't read books like this or go to the movies anymore. There hasn't been a movie for a long time that I wanted to see. Thanks for posting this review. I though I was just old and didn't get "it." Nice to know there is no "it" to get.
Sunday, August 15, 2010 10:50:00 PM

life in red shoes said…
Well now, I do aprreciate a person that speaks their mind.

Pam said…
I liked the book, and I still plan on seeing the movie. To me, the message was you don't need a man in your life to be happy. She'd never been single...but once she decided to explore the world on her own, and her own terms, she met the guy she later married. Also, she didn't want to have a baby and her husband was all about that. If you truly don't want to have children, as she realized, you shouldn't let someone else push you into that sort of lifestyle. They simply were not compatible.

I can understand if this reviewer didn't like the movie, but why take shots at the blogger from Julie & Julia, and the TV show Glee? She sounds really negative and unhappy.
Monday, August 16, 2010 10:02:00 AM

Beth said…
I totally agreee- couldn't get through the book and HATE people like that in real life- and while we are at it- will someone shut those annoying Sex in the City chicks up? and their ASSY fan base????
Tuesday, August 17, 2010 5:53:00 PM

One Gal's Trash said…
Sign me up for the "I love hating Eat, Pray, Love" club too. Such hand wringing, such self-absorption, Such crass merchandising. UUGgghh!
xoxo
Pam
Friday, August 20, 2010 7:14:00 PM