Retiree’s Day at the CHP Academy

My mother and I were guests of the California Highway Patrol at their “Retiree’s Day”, held at the CHP Academy today. 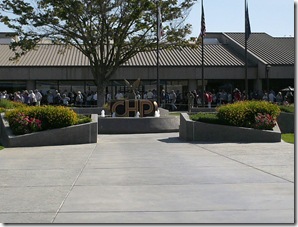 Of course, I couldn’t find my camera this morning, so I was stuck with moms.  Forgive the pictures!  Mom doesn’t like to take pictures, so I wasn’t able to get all the shots I wanted, having to stay close to her, but I was able to take some of the Memorial Ceremony.

Since the Retiree’s Day in 2008, eight CHP officers have lost their lives in the line of duty.  This ceremony was for them. 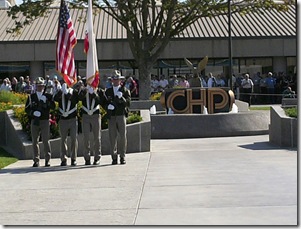 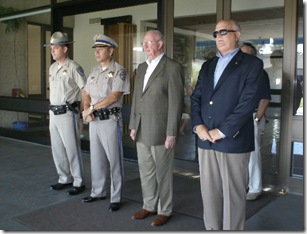 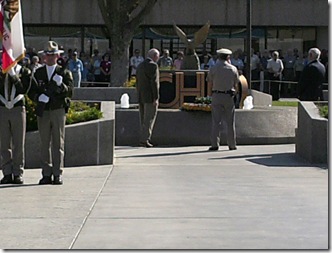 Laying of the wreath Current Cadets (in blue…there are so many of them!)

Commissioner Craig remembered me and my father, and my mother and I had a professional picture taken with him just because. Mr. Craig said that my dad taught HIM at the Academy, and that his nickname for dad was Pinky. Weird.

At the Academy, they have a plaque for all classes that graduated with the names of the newly sworn officers.  This is my dads from 1953.  It’s hard to see his name (damned camera), but it’s there…second name, first row. 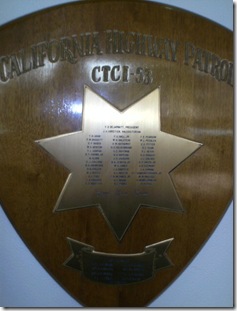 They were showing old 16mm films in the gym. We were standing in line to eat at the cafeteria outside the gym door when I heard my dad’s voice!!  I ran into the room where they were showing the movie, grabbed the AV guy and said “that’s my dad!”  It was freaky and cool all at the same time.

They were showing a film I had completely forgotten - “Behind the Badge” – with my dad in it, of course. I’m sure the AV department hates me now…. It will need to be transferred to new media, but they say they will send it to me as well.  I’m sure they will be glad when I stop asking for movies!!

It was an honor and a privilege to represent my dad at the Academy.  It was even more of an honor to meet CHP officers that were from the graduating class of 1949. Those are some OLD cops!  One CHP officer who was called to Afghanistan, served and returned, was given a standing ovation by these grizzled old cops.

It was a memorable morning.

Tomorrow marks three years since I lost my dad.  Dad, I miss you, and I love you to pieces.

Vintage Christine said…
I had myself a little cry reading this--I know it had to be an emotional day for you and your Mom. Thank goodness my dad is still around--he's going to be getting a prosthetic leg soon and he's so excited about finally being able to stand--looking forward to stuff like that is what keeps him going. That's so great you have the movies and I'm sure the AV people don't mind one bit getting those copies for you!
Saturday, October 16, 2010 11:46:00 AM

Jim said…
Barbara, this was lovely. How fortunate that you and your Mom could attend and be recognized too. And to hear your Dad's voice! That must have been strange but good.
My Dad is 94 and still kickin' it up.
Jim
Saturday, October 16, 2010 2:24:00 PM

~Kim at Golden Pines~ said…
Hello Barbara, what a wonderful way to spend the day and pay tribute to your Father. My Mom passed away almost 3 years ago (next week) and I know the ache you feel, but also how proud you are to have such a wonderful Father who truly made a difference and was such a good example and mentor!

fromsophiesview said…
So fortunate you are to be able to do this. I was never able to know my Dad because he died in a fluke airplane crash while readying for the Korean War. Many years later I ran into a fellow who had a display of air force memorabilia in a mall here. My father's picture was there and so the fellow took my pic with my dad's pic. I have a copy and will never forget that.
Sophie's other Dad-Ron
Sunday, October 17, 2010 9:59:00 AM

Dolores said…
What a wonderful experience for you and your mom. Your dad has sounded like a very special man indeed.
I can't imagine the surprise you must have felt when you heard his voice..... that's wonderful! I hope they send you the promised movie...
Hugs,
Sunday, October 17, 2010 11:46:00 AM

Tweedles -- that's me said…
Hi Barbara
This is an awsome tribute to your dad. I know you had a million feeling surface to the top of your heart in attending the service.
Its been 20 years since i lost my dad,, and 10 since i lost my mom.... its always a lost feeling
xoxo
tweedles
Sunday, October 17, 2010 6:33:00 PM