Well, after extensive questioning last night, we got our answer.

Minnie claimed that yesterday she spent most of the day looking out the window, making sure burglars and psycho killers weren’t coming into the house. 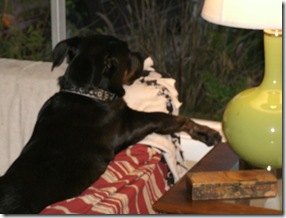 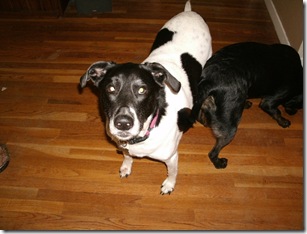 So I looked at the pictures again…and I saw something fishy…do you see it? 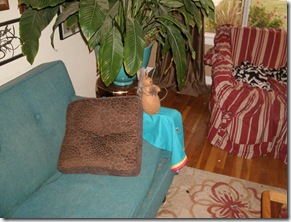 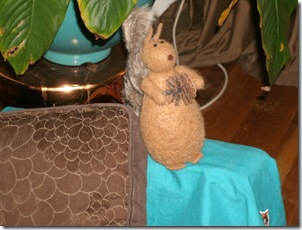 It was in the bedroom pictures too! 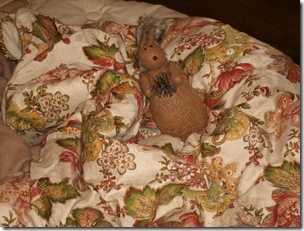 Two pillows, a magazine and a book gave their lives during the Great Squirrel Massacre.  Thank goodness no one else was injured.

We have put extensive squirrel traps around the house in hopes this won’t happen again.

I have my doubts.

Labels: pillows lost their lives the great squirrel massacre the tragedy we didnt do it

houndstooth said…
I knew it! I knew it was squirrels! Those pesky tree rats are such rabble rousers. You really can't trust them. If there are any nuts in your house, I'd throw them out now, they just attract more of the little devils!

The Daily Pip said…
GRRRRRR, I don't like squirrels!

Wyatt said…
That figures! You know, those squirrels are no good!

Cyndi and Stumpy said…
Squirrels are so destructive! Now you must locate their means of entry. Good luck with that!
Tuesday, January 11, 2011 8:51:00 PM

Molly the Airedale said…
We knew it wasn't you! Look at that innocent face! Stoopid squirrels!

3 doxies said…
I knews all along it was da squirrels...never underestimate them little boogers. I am just glad dat nobuddy was injured in da ordeal.

just call me jo said…
How unfair of you not to think of the squirrels before blaming your own fur children! You were right to apologize (and to have your doubts.) Damn squirrels!
Wednesday, January 12, 2011 7:28:00 AM

Vintage Christine said…
I think it's the same squirrel that killed Melvin the Chicken but I thought he was in the slammer. Prison break!!
Wednesday, January 12, 2011 9:23:00 AM

Kristin G. said…
My Zoe is a squirrel stalker. She got two squirrel stuffs for Christmas, and beats up on them routinely. They're trouble makers for sure!
Wednesday, January 12, 2011 4:59:00 PM

Dana@Mid2Mod said…
Last fall the squirrels tore up a custom-made outdoor chaise lounge pad (and I saw remnants of it hanging from a pecan tree a few days ago), but I have to confess that they've never made it indoors...thank God!
Wednesday, January 12, 2011 6:28:00 PM

Anyway glad you got to the bottom of the mystery!