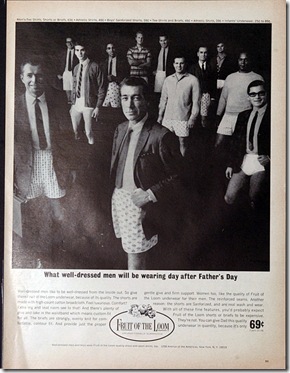 I’ll bet you didn’t know that “Casual Friday” had a bumpy beginning.

You see, all those men on Wall Street really wanted to dress down one day a week, but the first try was a miserable failure.

“Shorts acceptable” in the dress code for Friday was misinterpreted all over the world.  This is one of the few pictures that exists from that day.  Most were destroyed when Wall Street crashed in 1987.

You see, on that first Friday, Mr. Artbacker wore his boxers, and because he was the CEO, every other man not in shorts immediately dropped trou hoping that emulating him would get them that corner office.

Instead, customers were horrified, wives cried and Henley from Accounting became even more creepy (he’s the one in glasses and tighty-whities).

A quick stop at Human Resources showed Mr. Artbacker where he misinterpreted the dress code, and in embarrassment, he canceled Casual Friday altogether.  It wouldn’t return until the 1980’s, after Mr. Artbacker’s four-pack-a-day habit caught up with him.

So, when you’re getting out your khaki’s to join in Casual Friday, remember the men who went into that cold, dark experiment and failed miserably.

Oh, and Henley now works for the Playboy Corporation, where creepy is acceptable.

Vintage Christine said…
That is one STUPID ad! And as always, you took STUPID and made me laugh till I almost peed. HILARIOUS, Babs, just hilarious!!!
Tuesday, February 22, 2011 9:03:00 AM

Mogley G. Retriever said…
If you run the outdoor hair dryer backwards, it sucks out the brains. We suspect that these people sat too long under the "suck your brains out hair dryer" you showed earlier. Or if they had it turned on blow instead of suck, their brains got fried.

This Friday trend would have caught on if the energy crisis had not come along and made big goose bumps on all the exposed legs.

Another explanation is that the presidents wife came in and caught him with his pants down so he had to make it into a office wide movement to talk his way out of it.

DearHelenHartman said…
Two things stand out in this ad (and you'd think only one would) but the first is 69 cents? Underwear cost 69 cents? AND you were supposed to give it to your Dad for Father's Day?

Oh and looking again - what the point of the guy in plaid? You can't even see his shorts... perhaps he is what the man in front is daydreaming about? Too funny. Love your commentary as always. Thanks for sharing.
Tuesday, February 22, 2011 11:33:00 AM

How many PA's fainted?

capewood said…
In the late 1990s I used to attend meetings at a law firm. Casual Fridays came to this firm. Their idea of casual was to not wear a tie. And they looked so uncomfortable! Casual Fridays were dropped after a few months. Over the years, the non-lawyers who attend this meeting have gotten more and more casual (no jackets, no ties, polo shirts) but the lawyers, to this day, still wear 3-piece suits.
Monday, February 28, 2011 8:25:00 PM