It’s All A Lie 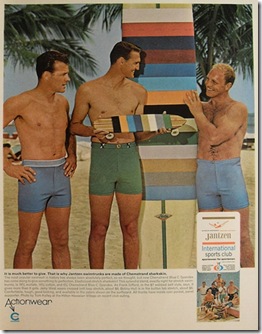 Here’s Frank, Jerry and Bobby, just three guys hanging out at the beach.

Jerry is a little confused…he brought a skateboard.  Bobby said “bring your woody” and Jerry…well, Frank will straighten him out later.

Bobby is modeling the newest in bathing suits for men with no belly buttons.  How he made it past the censors with that chest hair is a question to be asked.

Frank is modeling the “it’s almost too tight, but it makes me look big” suit.  He’s working on his muscles.

Jerry is just a bit too amused at Bobby, but since they were posing on Fire Island, I guess it’s okay.

They’ve all joined the Jantzen International Sports Club.  Too bad there are no girls in the club.

No one would ever guess that these men were really something in the day.  That’s Frank Gifford (football) on the left, Jerry West (basketball) in the middle and Bobby Hull (hockey) on the right.  Some athletic bodies, eh?

Vintage Christine said…
Frank married Kathy Lee. OBVIOUSLY due to a major concussion sometime in his career, which also may explain why he agreed to do this ad. BTW, you notice there are no baseball players. That's because back then THEY were all fat and out of shape!
Tuesday, February 15, 2011 4:44:00 AM

Mogley G. Retriever said…
This must be a new advertisement. The real old ones not only did not show belly buttons, they did not show knees either.

3 doxies said…
Bwhahahaha...oMD, I knows Frank but not da others.
I seriously needs a beer afters seein' dis....OMD, I see their knees...and their belly buttons!

Enought to put you off your dinner!