Prince is a Dick 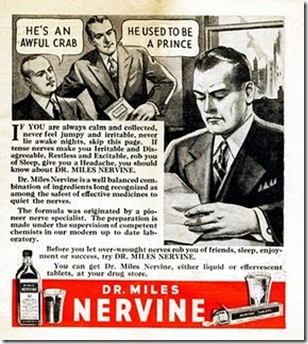 Prince has become an awful crab.  He has to work with two guys who don’t seem to understand that HE’S SITTING RIGHT THERE!

Ever since they put him at that desk, Arnold and Jacob have gabbed, gabbed, gabbed instead of filing those TPS reports.  Prince became restless, irritable and disagreeable.  And they messed with his red Swingline stapler too.

Fortunately, Prince’s wife bought him Dr. Miles Nervine, an extract of “ingredients” long recognized as safe and effective, and made under “the supervision of competent chemists”.  You can’t trust those bozos down at the five and dime, oh no you can’t!!

These safe ingredients, Phenobarbital, Demerol, chloral hydrate and Benzedrine, mixed with powdered laxative, help calm Prince and make him less irritable.  He sleeps well and functions as good as any of those hard drinking executives.  And now he doesn’t feel like burning the place down.  He’s mellow, man.

jamie@midcenturymania said…
Where can I order some? Does it come in Dysfunctional Family size? I'll take a gallon! Dr. Nervine is the man.
Friday, February 11, 2011 7:36:00 PM

Vintage Christine said…
Ooooooo, I want me sum! All those ingredients were legal back then? Wow! I think my mother dosed herself with it. Babs, I'm around, just can't find the time or energy to blog right now. Plus I'm trying hard to stay awake so I can watch Spartacus: Gods of the Arena because, well, those guys are WORTH staying up for. Even the gay ones!!!!
Friday, February 11, 2011 7:48:00 PM

houndstooth said…
Maybe I need some of that stuff to make it through the day! It sounds like a pleasant state of mind!
Friday, February 11, 2011 9:34:00 PM

1950s Atomic Ranch House said…
Yes, drugs are the answer, just ask the pharmaceutical companies whose drugs get recalled every two years while they make billions. =)

Gee, maybe it's because we have to work so damn long and hard to get those meds in the first place?

Ahh what a world we live in!

Dolores said…
Which kinda reminds me of 'Carter's Little Liver Pills'..... my mother took those when I was a little girl, never knew what they were for, doubt if it was actually for the liver.
Saturday, February 12, 2011 7:30:00 AM

I think we need some of that at our Valentine's Blog Party!

Tweedles -- that's me said…
i came to check on you and make sure you are still feeling ok..

Where did u find this one? Sounds like something you could give to someone you don't like! LOL

Have a great weekend.