Thank you to Hawkeye, a Chesapeake Bay Retriever who has his own blog browndogcbr for giving me this special award! 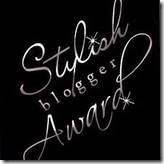 1.  I was truly an accident. My mother had her tubes tied for seven years before I came along.  She told the doctor if I was a boy, he was a father, because she wasn’t taking home another boy.

2.  I have worked as an EMT on an ambulance.

4.  I delivered singing telegrams when I was young and brave.

5.  I once played Rudolph the Red-Nosed reindeer in sixth grade, as well as Yenta the Matchmaker (same grade). I was never brave enough to pursue drama.  I cave at auditions.

6.  I wanted to be a PSA stewardess something fierce. By the time I was old enough, PSA was gone. (see their 1970s uniforms here…)

Tell me two (or more) things about yourself I don’t know, why don’t cha?

The Daily Pip said…
Congrats! You have had some cool jobs!

houndstooth said…
You must have really been a surprise!

Two things about me? I once got a private tour of the White House with a few college friends. At one time I worked as a sign language interpreter. I guess I'm not that exciting!
Wednesday, March 23, 2011 8:06:00 PM

Wyatt said…
Those are some great fun facts!!
Congrats on your award and thanks for making us smile everyday :)

Kari in Alaska said…
Congrats and nice to read more about you :)

Tweedles -- that's me said…
Hi Barbara
We did not know any of those things about you. thank you for sharing. They were so interesting . You have led an interesting life!
And congratulations on your award!
love
tweedles
Wednesday, March 23, 2011 9:36:00 PM

suzieQ said…
Oh...I just got the title to your post and I had to comment; isn't that the best Xmas movie, ever?
Almost every line in that movie is a keeper.
I've always thought how wonderful to have been in a movie that will be a classic in time, bringing joy to others, long after you're gone.
Thursday, March 24, 2011 5:13:00 AM

The White Pear Tree said…
...except I didn't say fudge! That is my favourite movie too SuzieQ! Brilliant little film.

Dolores said…
Congratulations on the award. I loved reading about your jobs, you've done a little bit of everything.

Your mom's remarks to the doctor were so cute.
I was a big surprise too. My brother was 5 years older than me, and she was told she couldn't have anymore children.

Hmmm, what don't you know about me.....I worked for an orthodontist for 15 years doing lab work.
Before Alzheimer's entered our life, my job was volunteering. I volunteered for everything, including cleaning dog poop from the cages at our humane shelter...
Thursday, March 24, 2011 8:18:00 AM

~Kim at Golden Pines~ said…
congrats on the award! I really love these awards because we get to find out things about you that we may not otherwise!