Well now, we all know that throwing a party can be expensive.  We can think two ways – throw the most expensive party on the block (and be expected to do it every year the same way), or do it up cheap so someone else will have that mess to clean up.

Since your guests will be drinking their BYOB (What? Yes, part of throwing a cheap party is making them bring their own booze), they won’t be that hungry.  This is good, because these recipes are designed for people who just aren’t that hungry. 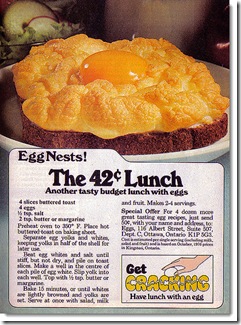 Whip up some egg whites, spread them on buttered bread. Crack an egg in them and bake.  One loaf of bread and a couple dozen eggs…that’s a party under $5, if you shop at WalMart. 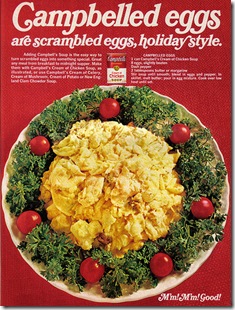 That’s right, Campbelled Eggs!  Take 8 eggs, a can of Cream of Chicken soup, a little dash of pepper, and you have a meal for four, eight if you serve it as an appetizer.

So there you have it – an entire party for under $10, excluding decorations, which you can make by hanging yarn all over the room.  Woot!  Happy New Year, huh??

Labels: a fun time had by all ass like a mountain campbelled eggs champale cheap new years party drink drink drink egg on toast food that looks like puke

houndstooth said…
I definitely think the party's going to be at somebody else's house this year! lol
Wednesday, December 28, 2011 5:07:00 PM

Anonymous said…
We love it!! Of course, we both like eggs too though. The $.42 meal actually looked really good!!

3 doxies said…
I has dat song in my head from da commercial..."Da Incredible Edible Egg. Dman, you Lady...I's gonna be singin' it aaaaaall nite nows.

Wyatt said…
Maybe we will save those recipes for the morning after...