Pants That Make You Get Stiff

Meet Peter, Oscar, Thad and Will.  The bell bottoms tolled for thee. 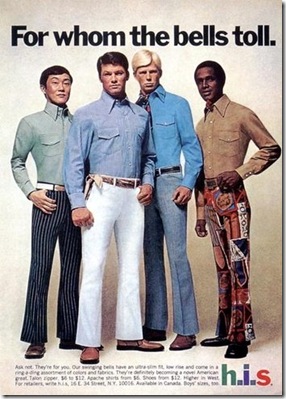 Unfortunately for Peter, this uber-starched outfit gives him the look like a large metal pole was inserted inside him just before the shoot, and he didn’t quite enjoy it.

Oscar never got over the humiliation heaped from his friends for the “scarf as a belt” look, and later became an undercover prostitute decoy.  Thad…poor Thad.  The photographer said “look studly”, but it translated to “look like you’re trying really hard to fart”.

Will actually picked up three girls at the photo shoot…those pants were powerful chick juju…irresistible.

Now, about those shoes…

jamie@midcenturymania said…
The labels on this post make me laugh as hard (no pun intended)as the post. Thanks for ending my long week with a good laugh. I can always count on you.
Friday, March 12, 2010 9:41:00 PM

Vintage Christine said…
Ack! They don't even look like real people! And to put Hemingway with these guys is really crazy. Thanks for a good laugh girlfriend!
Saturday, March 13, 2010 6:48:00 AM

C: said…
But Thad's hair!
A solid mass of blond that may well have been the template for the Ken doll!