Another woman approaches you and says “if you don’t give him this aftershave, I will”…what the hell is that? 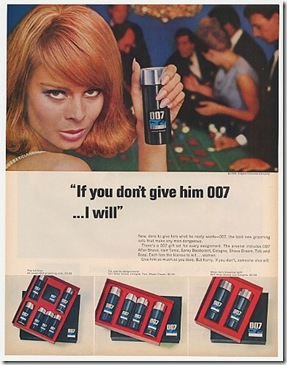 Personally, I’d say “go ahead”.  Will my man feel more “dangerous” to this woman because she bought him after shave?  Who knows.  What he would know, however, is that if he came home smelling like James Bond out of nowhere, he’d have some ‘splaining to do.

But seriously, what kind of empty threat was this supposed to be to women?  Maybe she has better cooking skills than me (however, I doubt that woman could make ice).  Maybe she’s offering sex on demand when I don’t (hope she’s had her shots).  But my worrying because I’m not buying him after shave and some other woman might?  Come on.  How stupid did advertisers really think women were back then?

capewood said…
There is a great video of a commercial for this stuff here http://www.youtube.com/watch?v=-0sbCauLP9Q.

Chickens in the Basement said…
Wonder if this cheap cologne would work like mace if squirted in Miss "I'll Steal Your Man" Ho's eyes!
Sunday, March 07, 2010 7:02:00 PM

Vintage Christine said…
I think 007 used to be a code word for VD, wasn't it? So, personally, I'd prefer SHE gave it to him. But of course since he loves me so much, he'd fend her off with a karate chop to the belly button and we'd skip merrily on our way. La de dah, la de dah. Ohhhh, Miss Christine is feeling silly today, isn't she?!
Monday, March 08, 2010 7:29:00 AM

Mimi said…
Those ads were so horrifyingly sexist! I recently posted the TAB Cola commercial from the 1970's on my "Retro Dieting Blog", and I still can't believe how offensive it is to women. Gag! I guess it worked back then.