Barbie Has Always Been A Materialist Witch 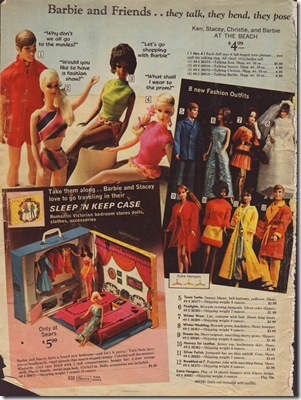 “What shall I wear to the prom?”

Yeah, they talk, they bend, they pose, but they have changed so much.

Sure, Barbie has that Dream House now, but look where she came from!  The Sleep ‘N Case Motel!!  Twin beds because she couldn’t even afford that place by herself.  She only dated Ken for his car and ability to buy dinner.

You wouldn’t catch her with Christie or Stacey today, no sir.  Christie marched on Washington became a Senator.  Stacey ran off with Ken’s cousin, but that didn’t work out. Today, she’s a dental hygienist in Tenefly, NJ.  Barbie’s all about the party.

Oh no, Barbie won’t admit it now, but she came from meager beginnings.  Today, materialistic witch.  Yesterday?  Just a roomie trying to scrape together enough money for rent and a Pucci pantsuit.

The next time you see Barbie, ask her about the Sleep ‘N Case and watch the blood drain from her face.  She’s still worried that those pictures will get out.  Yes, they were “artistic”, but she has a rep now, k?

Wyatt said…
Oh, don't dis on the poor gal too much. After 50 plus years, she still can't figure out who she is...BOL

houndstooth said…
You forgot about her cousin P.J. who got caught stealing booze!

LOVE your Barbie post! I collect vintage Barbie and friends and this resonates strongly with me! I will now have to search for that Motel suitcase and make Barbie sleep in it, lol!
Thursday, February 24, 2011 6:01:00 AM

Suzanne said…
I just dicovered your blog the other day and I think you are soooo funny. I spent half a day reading all your back posts, and laughed til my sides hurt. Please keep it up! We all need a good laugh to start our day. :)
Thursday, February 24, 2011 7:20:00 AM

Sandy aka Doris the Great said…
Oh my, I love this post. You're absolutely right. And you didn't even mention what she supposedly did for a living. Did you see the make-up and some of those outfits she wore! Capital T-R-A-S-H!

DearHelenHartman said…
She had to work hard to help pay for little sister Skipper's future boob job. Really, can you imagine growing up in the shadow of Babie's, um, attributes? (was always more of a Troll Doll kid myself - naked, magic lucky powers, wild fantstic-colored hair, what's not to love?)
Thursday, February 24, 2011 9:03:00 AM

Vintage Christine said…
Gawd, I hated when they made Ken have plastic hair. Back in the beginning he had what seemed like sand glued to his head and you could rub it off and make him bald or leave some on and pretend he had a scalp disease of some kind. I just googled the case and they now sell for around $50-60, which is a pretty good return on a $5.99 investment in the early 70's.
Thursday, February 24, 2011 10:57:00 AM

fromsophiesview said…
Barbie talks, she bends and she poses....and that's about it! Now Ken..that's another matter altogether...his verbs are much more daring!
Saturday, February 26, 2011 11:51:00 AM