I Wanna Be Regular 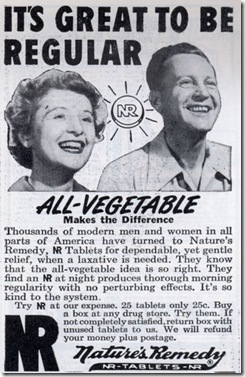 Ever notice how constipated people used to be?

The only generation that actually ate regular meals, three times a day, yet plagued by incessant constipation.

Of course, this couple was considered “modern” because they used Nature’s Remedy, kind to the system and no worries of perturbing effects. 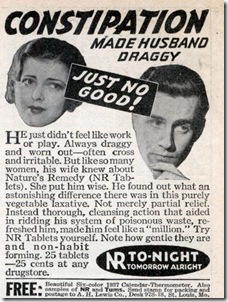 Now this couple, well, she was fine, but he was just.no.good.

Dirty bastard never wanted to work OR play…worn to a frazzle, cross and irritable.

All because he couldn’t poop on time.

How did these people become so irregular?  What was it that made them this way?

Was it the lack of McDonalds or Kentucky Fried Chicken?  Did they not have enough Jello to push stuff through their systems?  Questions, questions.

Have you ever had to suggest a laxative to someone worn out and irritable?

The White Pear Tree said…
I think the second couple has a problem with irregularity because they're just floating heads. That'll do it every time!
Tuesday, June 12, 2012 7:21:00 PM

Dolores said…
My mother gave me this horrible laxative on Friday nights whether I needed it or not. I'd wake up on Saturday morning with stomach cramps...ugh!
Hope you're doing well!
Your mother/sister from another state.
Hugs,
Tuesday, June 12, 2012 8:01:00 PM

3 doxies said…
Wells thank dogness you posted dis!
Nows I can recommend it to my mum cuz her has irritable heres lately and she is gettin' on my nerves.
I bet it was cuz her couldn't poop.

Vintage Christine said…
I love to watch Holly Dog when she's constipated. She gets into that little dog poop stance, and after awhile she hops around on her front legs to see what the problem is. So she tries again and if nothing still, she runs over and starts eating this one particular weed that apparently is a dog's version of the human "Nature's Remedy". I don't follow up on this problem of hers, but I'm pretty sure it works. Poop posts are some of my favorites! Hope all's well with you--I've been away from the computer so haven't been able to keep up with you.
Wednesday, June 13, 2012 4:34:00 PM